The weekend saw Coventry Car Day – a celebration of Coventry-built cars right in the heart of Coventry city centre.

The cars all met (early) at Coombe Abbey and despite the forecast of torrential rain and storms for the majority of the day, the Herald, top down of course, had a pleasant run to Coombe with a good bit of early sun. This was 8am so the temperatures were pretty cold and the normal middle ‘N’ reading on the temperature gauge was showing a slightly lower ‘cold’ reading. Perhaps re-fitting that radiator blind would be a good idea for Autumn/Winter driving? 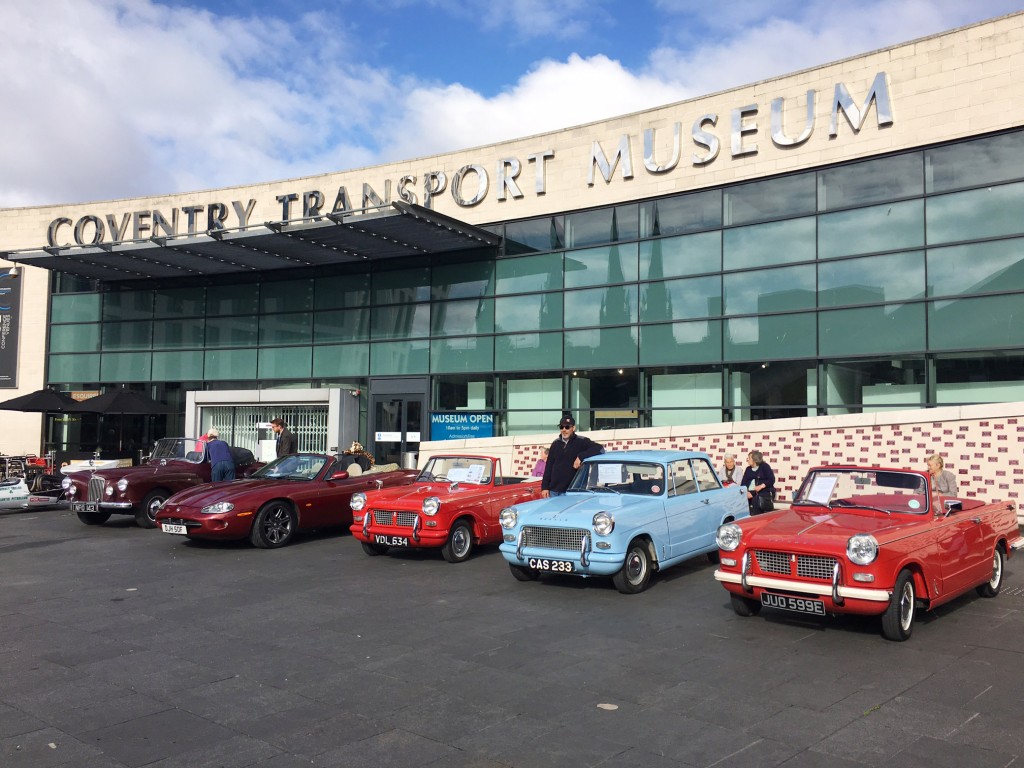 I had the thought of no-one turning up, due to the bad weather forecast so I was really pleased to see a Triumph Stag appear around Brinklow and follow me all the way into Coombe – I was certainly more than pleased to see 50 or 60 classic cars already at Coombe when I (and the following Stag) arrived.
There were virtually all Coventry makes at Coombe Abbey; Jaguars, Alvis, Sunbeam, Rootes, Standards and Triumphs – and a few non-cov including an early Audi, a couple of Escorts and even an Aston Martin DB4. The first car I saw was a very rare Powder Blue Triumph Herald S. This was the ‘stripped’ down cost saving version of the 948cc saloon, introduced briefly just before the launch of the 1200. Not many were made, not many were sold and naturally not many survive. The S wasn’t really that different and therefore wasn’t too much of a ‘saving’ – it didn’t have the stainless steel trim on the side of the car, no heater and no carpets only rubber mats. The S is easily identified by the full width grill on the front of the car.
Shortly after another Herald appeared – a 1200 convertible and all three of us headed directly into Coventry city centre including a brief period on the ‘designed-by-a-madman’ ring road. Complete with roadworks and huge concrete blocks randomly placed in the middle of the road we safely navigated our way through, arrived and parked right outside the entrance of the Coventry Car Museum on Millennium Place. 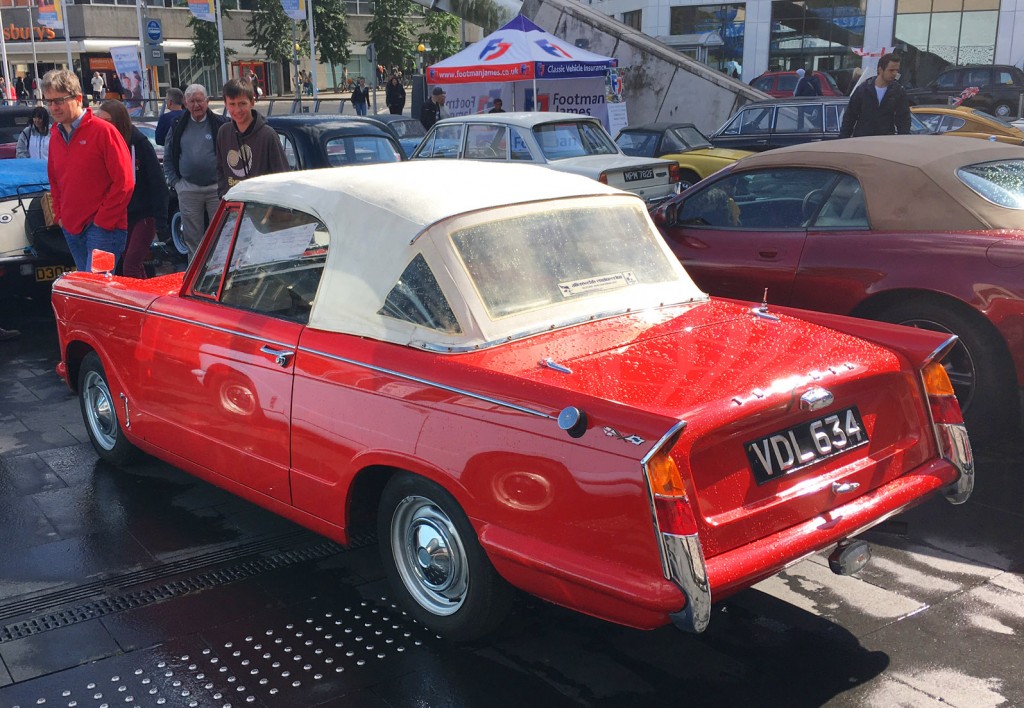 We were lucky enough to last until around noon whereupon the heavens then opened up, with showers, followed by a period of bright sunshine, followed by downpours, sunshine and repeating every half hour or so. Our Heralds roof had a rare airing and remained up for the majority of the afternoon – which was no problem apart from obscuring our specially made sign for out StandardTriumphWorks.co.uk project. 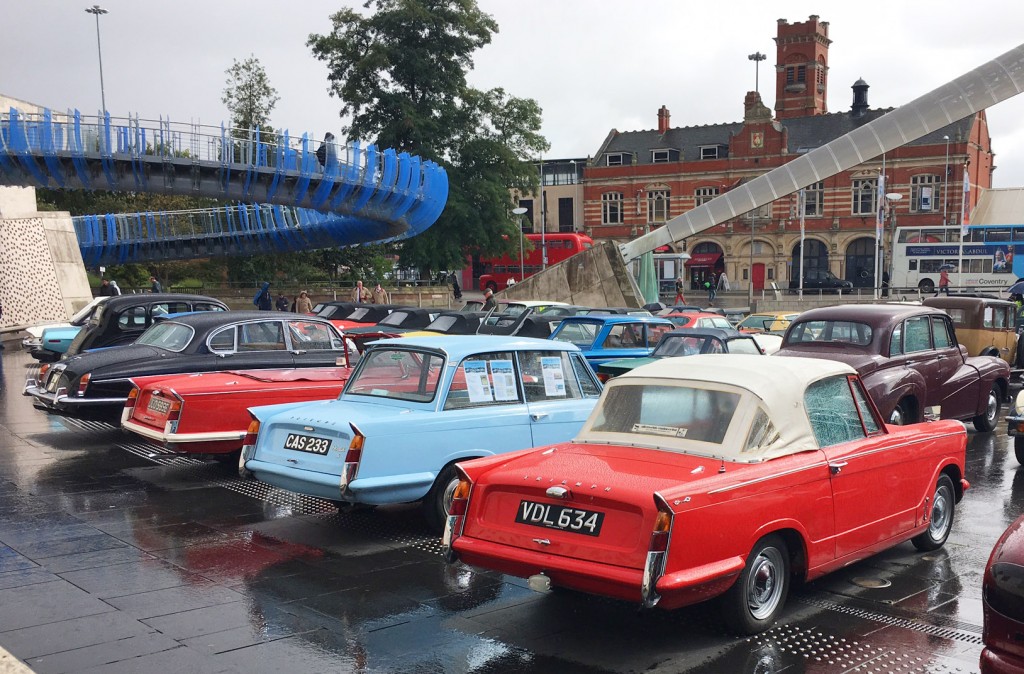 There was a good mix of cars (a Sunbeam Imp was awarded best car) and a good number of people seeing them – again due to the forecast lots of shoppers still braved the conditions. There were a number of great comments about the Heralds. 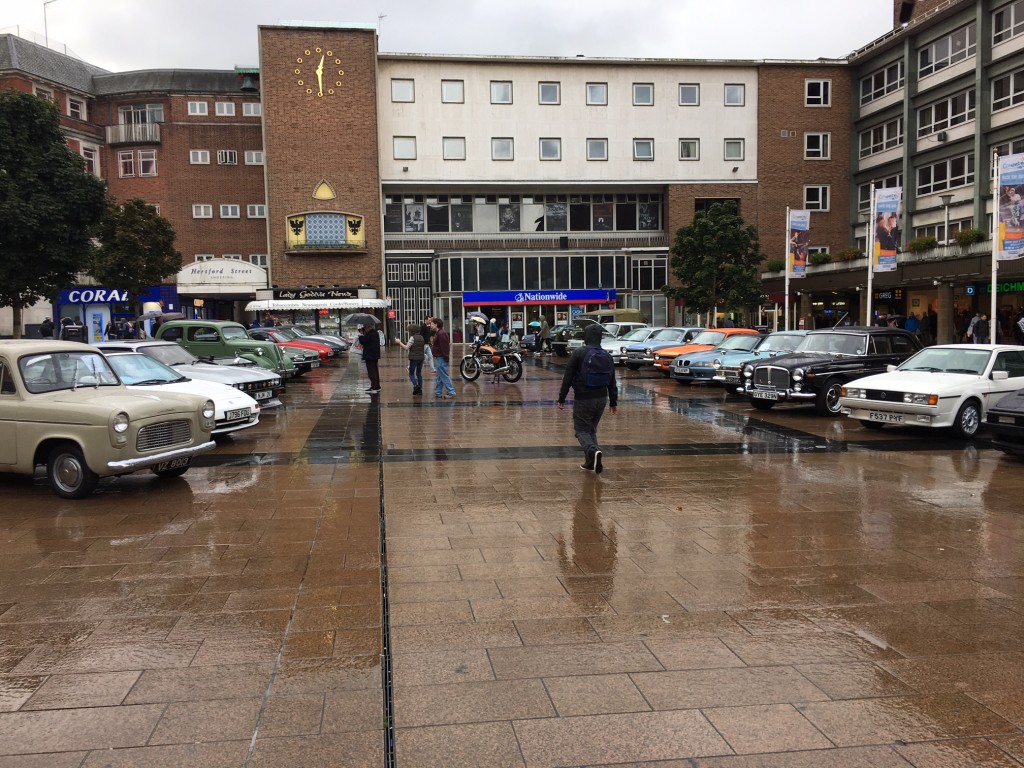 Non-Coventry-Built cars could be found at Broadgate

The journey back was pleasant with the roof down and the sun shining allowing the car to dry really well. We were seconds from home when the rain came back to soak the car as she was being put away but the following day she was seen as completely dry, again especially underneath and around the engine bay. 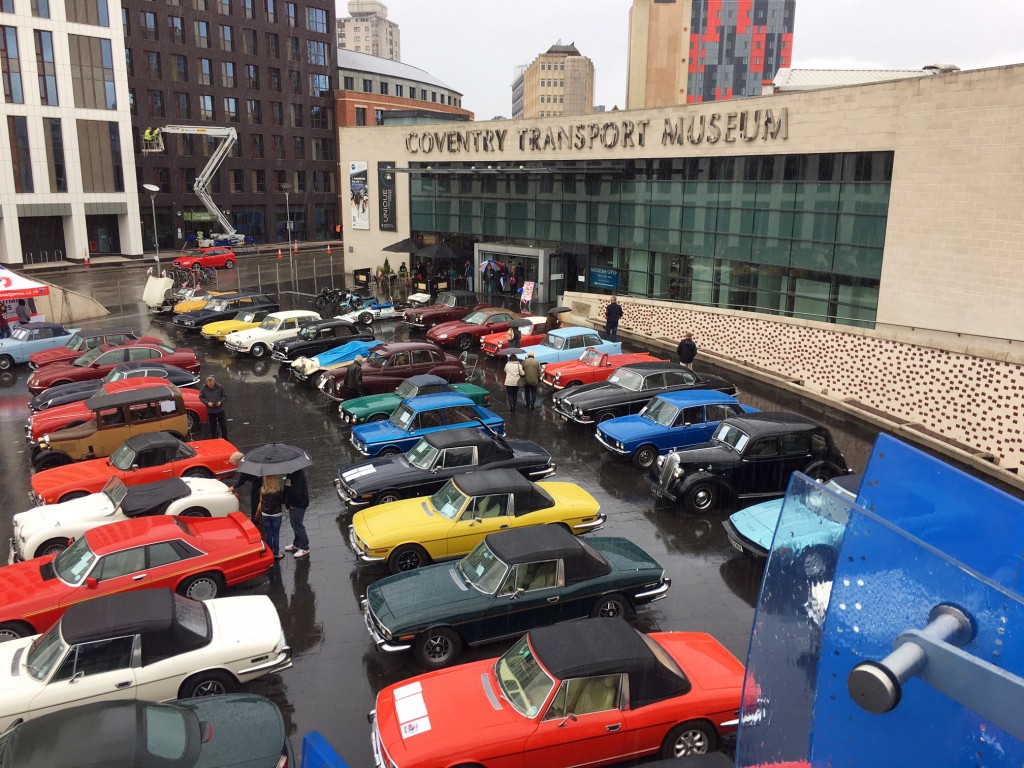