The Triumph Herald was launched to both trade and customer acclaim in the Spring of 1959, initially as a 948cc powered saloon and coupe. At first orders for the new car outstripped supply and cars were difficult to get hold of, especially if you wanted a certain colour.

“Standard Triumph were desperate for a good new lightweight family car at an affordable cost to replace the Standard 8 and 10 and by chance stumbled upon a brilliant designer called Giovanni Michelotti, based in Turin. Michelotti produced the bodywork that had a 93% visibility from the drivers seat, a forward-hinging bonnet that gave unrivalled access to the engine and elegant looks.” 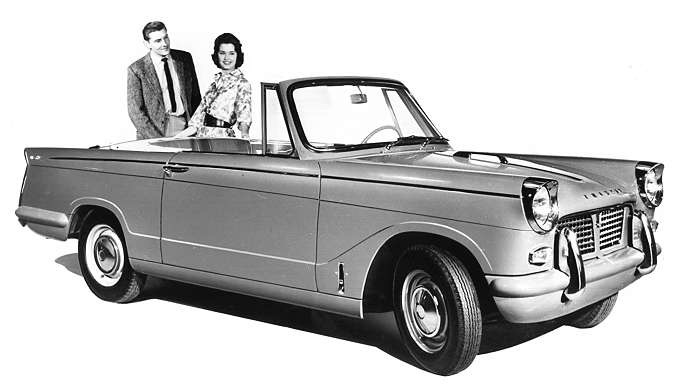 The Triumph Herald was an exciting design and introduced many new developments, such as all round suspension, and collapsible steering column if the car was involved in an accident whilst using traditional methods on a rigid chassis.

“With the ease of construction it was easy to adapt the Triumph Herald into different body styles with the first model, the 948cc car available as a 2 door saloon, 2 door coupe and 2 door convertible.”

A lot of the details relating to the history of these early cars has been lost, memories faded and a great deal of the people involved in the design, manufacture and selling of these cars have long since passed on. Our sister site, www.Triumph-Herald.com is rebuilding this history with an accurate archive of ALL 948cc powered cars – and would love to hear from you if you have any memories of ownership. 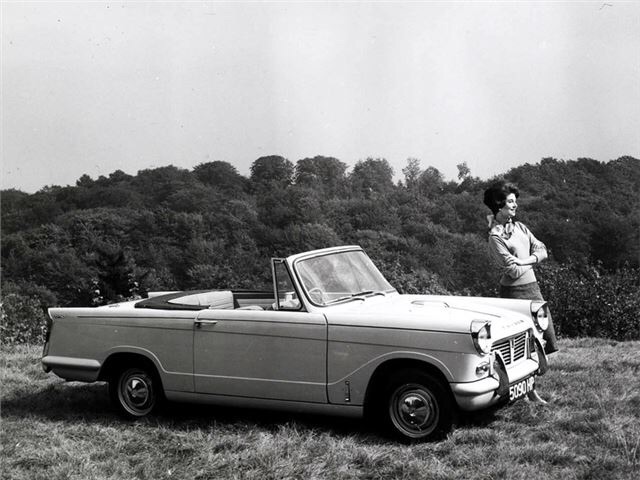 This site is dedicated to the convertible variant of the Triumph Herald. Introduced in March 1960, the car had the same engine spec as the coupe with a strengthened rear body section and a canvas hood that could fold away completely. Initially convertibles were only available for export markets with large numbers being sent to Australia, Belgium, Canada, USA and Europe. In the UK the convertible 948cc Triumph Herald was not officially launched until September 1960 – just when summer was over!

“In 1960 very few affordable cars had a convertible version, the newly launched Austin Mini, Ford Anglia and Austin Farina never featured a convertible in the line up – the only real alternative was the drop-top Morris Minor which was starting to look and feel a little dated compared to the new stylish Herald.”

Available in the same range of colours as the saloon and coupe the convertible was always a monotone with a choice of black or white hoods, it proved an instant success and again it was proving impossible to build the convertibles in sufficient numbers to meet the customer demand.

“…and sales distribution demand and export demand – the main reason for Standard Triumph’s financial difficulties was that they were stretched too thinly – a brand new car, available in now three bodywork guises (but using a large number of the same components) the factory could not satisfy ANY dealer, ANY export order, ANY spares service, ANYTHING. There were orders for Signal Red coupes and and convertibles that were sent out late as Coffee saloons, it was a mess.”

Standard Triumph needed to fill more orders to sell more cars, it couldn’t and it a takeover was proposed by Leyland Motors during 1960 and made public in December. The takeover was agreed and completed by the Spring of 1961. Wholesale changes of top level directors and management took place. The 948cc car was coming to an end of it’s production to be replaced with the 1200cc car. The ‘bean counters’ were in and cutbacks were looming.

The Triumph Herald 948cc convertible was a rare car when new, it is very, very rare today.