Sywell Classic Pistons and Props – Oh this could be such a good show!

Perhaps it’s easy to comment on these shows; there are never enough toilets, X is always too far from Y etc etc and yet the organisation teams spend hours and hours preparing for the show. I understand this yet have been to better shows this year where show profits went direct to charity. You are often open to criticism more-so when you are a business and this is what you do. 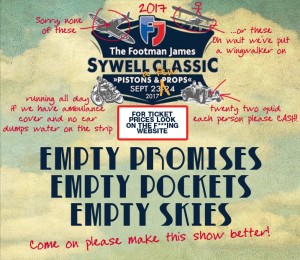 For the fourth year in a row we have taken the Herald to Sywell Pistons and Props – a show that promises so much and delivers so little. I always look forward to the show, thinking the little problems will be resolved but leave each year thinking it’s such a shame. It could be an excellent show, it should be an excellent show. It isn’t. Consequently it’s time to write a proper review on one aspect of the show, which I feel is inaccurate, lazy and very, very poor; the marketing of the show.

The two day show is put together by Live Promotions and takes place on the airfield grounds at Sywell, Northamptonshire and advertises itself with “Spitfires, Tiger Moths, Mustangs, Hurricanes and Kittyhawks are just a few of the iconic planes that will take to the skies at The Footman James Sywell Classic Pistons & Props.” It all sounds wonderful doesn’t it? The Pistons and Props logo even features a Spitfire.

The Sywell Classic Pistons & Props was always up against it in 2017. With a large airshow at Duxford airfield the same weekend, (£33.95 Adult entry, supporting IWM charity) we passed some classic cars who were going to Hinckley for a classic car show there (Free Entry) and there was also a Steam and Vintage fair at Kettering (£9 Adult entry, supporting Air Ambulance) – so lots of competition. So Sywell Classic Pistons & Props had lots to do to get attract the visitors. 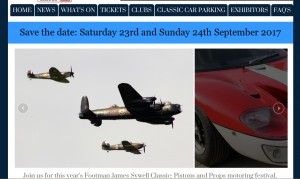 (Not at) Sywell Pistons and Props

This is incredibly out of date and the very first photo you see is a Lancaster, Spitfire and Hurricane – this photo is (at least) three years old as the Lancaster forms part of the Battle of Britain Memorial flight and did not fly last year at all due to the grounding of the plane. The BBMF did not fly this year (2017) at Sywell (they were at Duxford) yet were still promoted on the website. 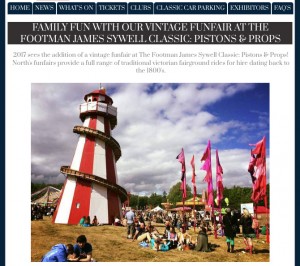 A Helter Skelter would be good

New this year saw a Funfair – featured on the appallingly bad website showing a Helter Skelter (there was no Helter Skelter at Sywell this year) with the text, on the site, lifted directly off some spiel from the funfair people themselves whom we now know are called North’s. “North’s funfairs provide a full range of traditional victorian fairground rides for hire dating back to the 1800’s.” Great, now tell us how it will work with Sywell.

The funfair aspect on the website looks to be the only update (apart from show dates) with many of the photographs show are three or four years old.
Live Updates
Social Media is really important on the build up to any show and is crucial DURING the show. This medium offers the chance to ensure any issues can be addressed, such as the post stating no internet/telephone at the entrance points so entrance was cash only. The first comment back was “you’ve known about this from last year – only a year to resolve.” But things happen and it was good to air this problem early.

The posts on Facebook during the show numbered just 9 on Saturday (not one showing the evening) and 6 on the Sunday. Every post was a Sywell Pistons and Props logo with a timing for an event – Blades in the sky, for instance. These did get reactions from people with everyone commenting “how much for tickets?” These comments were left unanswered for hours (Saturday comments were not answered until the show had finished) and eventually each “how much?” comment was answered but not by the price for the tickets – but “look on the website” to which most people read as “look on the website for prices you f**king idiot!”

How Much?
The tickets themselves were incredibly expensive – it is a very, very expensive show. We took a classic car, parked it in the Pole Position car park, which made up a display that featured at Pistons and Props. 1 Adult ticket was £22, my 9 year old £10. £32 in total for that we did not get a ticket, a receipt or a program of events, we were simply told to park next to “that E-type over there” – The E-type Jaguar the most iconic and most recognisable classic car there is, the E Type we were told to park next to was in fact a MGA! I don’t think there was a single E-Type in Pole Position parking on the Sunday. You can save a couple of quid by pre-booking tickets but the end of September you might be lucky to get good weather one day, let’s see nearer the time the best day.
Clear Skies – and Lovely Weather Too
Anyhow we were in, a sunny Sunday – a couple of obligitary photos taken and posted on our Facebook page – we seemed to have internet, which brings us back to the Social Media of Pistons & Props – if you need an example how not to promote an event this would be an excellent case study.
Getting Social
We have established the lack of postings – the consistent nature of the same look/design (remember showing the logo with the Spitfire?!) yet all around were visitors who had made the extra effort and looked absolutely amazing – airman uniforms, polka dot dresses, period mechanics and all sorts of vintage outfits. Were any of these people photographed and put on the social media for Pistons & Props during the two days? No, none. Not one. 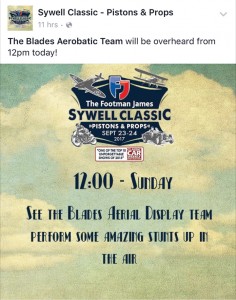 Wait a minute – overheard? Yes I guess if you were in the Vintage sellers hanger you would hear the Blades, surely a misprint of ‘overhead’ which was pointed out on the very first comment.

At least the main graphic was ok… 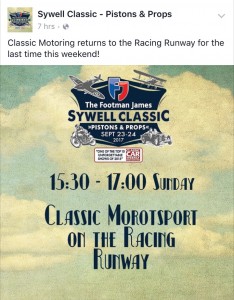 Morotsport? WTF is Morotsport? It’s not difficult is it when you are showing your logo with a Spitfire (that wouldn’t be on show) a post that could easily have been designed weeks ago and scheduled to post on the day. There were some great comments on this post but sadly it has been since taken down, so we lost the jokes and general taking of the P. Thankfully we managed a pic before that happened.
Yah Boo!
It all sounds rather negative doesn’t it? I really want this show to do well – each year I have always said it will get better but it has got worse. The false promises. If you show a photo of a Helter Skelter to a nine year old they expect to see a Helter Skelter, similarly prop fans, if you tell them about “Spitfires, Tiger Moths, Mustangs, Hurricanes and Kittyhawks” you leave disappointed with a no-show. The sky was very quiet for large periods of the day.
Sywell/Live Promotions – please, please work on the positives*  – the three aerobatic teams (The Breitling Wingwalkers, Yakovlevs display team and The Blades display team) were excellent. The Funfair was new and good (a merry-go-round, swingboats and dodgems) and needs to expand next year. The food stalls were good quality (the silver CAKE stall amazing). The people that turn up and pay the money to get in in vintage gear, photograph them, make them feel special for their efforts and put them on Social Media during the show, answer questions on pricing, show good stuff on the Saturday to encourage visitors to the Sunday and always, always check your spellin!
A couple of comments from Facebook.
“Bit disappointing really, first time attendee and as other comments the mix between pistons and props was definitely heavy on the pistons. Don’t get me wrong always impressed with the display the Blades put on but it was disappointing that there really wasn’t any other aircraft, even stationary despite the event being advertised with a fly in and fly out – think the only things flying in were birds!
Vehicles were good to see the first time on the track but to repeat the same thing in the afternoon was a shame – this was probably just a result of a poor turnout.
No BBMF on the Saturday despite being advertised by them and to the best of my knowledge no announcement on the day as to why.
All in all for the money it was OK but would probably have been better off popping down on a normal Sunny day to the airfield to see what was flying.
As a early booker paying £18 a ticket it was frustrating to find these being sold on Groupon for a lot less and as others have said people getting in free on the day.”

Malcolm Austin, 2 Star Review“Quite disappointing, a few pistons and even less props! We went 2 years ago and it was excellent, plenty of track and air action. Last year there was less. This year even less. The commentator said there was a good cross section of motor racing on track, I don’t think so. I think that 3 runs by some of the vehicles made it all boring, and hyping it all up with the Leyton House March and Penske Indycar running, with only the March doing one run was a joke. I hate to see what next year is going to be like. Wish I had gone to Duxford instead!”
Terence Ward, 1 Star Review

“Simply not enough going on in the air. Why use photos of a Spitfire on advertising on roads around the event when they were down at Duxford and the BBMF were not re-booked after their grounding?”
Adam James, 1 Star Review
*but address the negatives urgently