We have a mystery regarding the first ‘owner’ of VDL – a couple of clues suggest Mr Stimson was not the first owner – but the second.

The modern V5C’s I have (I have copies of older V5C’s) Indicate I am the fifth owner – with each previous owner accounted for (1. Stimson, 2. Smyth, 3. Feast, 4. Longmore, 5.Me) However the advert from 1984 from Allen Webb Engineering seems to suggest two owners on the Isle of Wight – with Mr Stimson being the second owner. 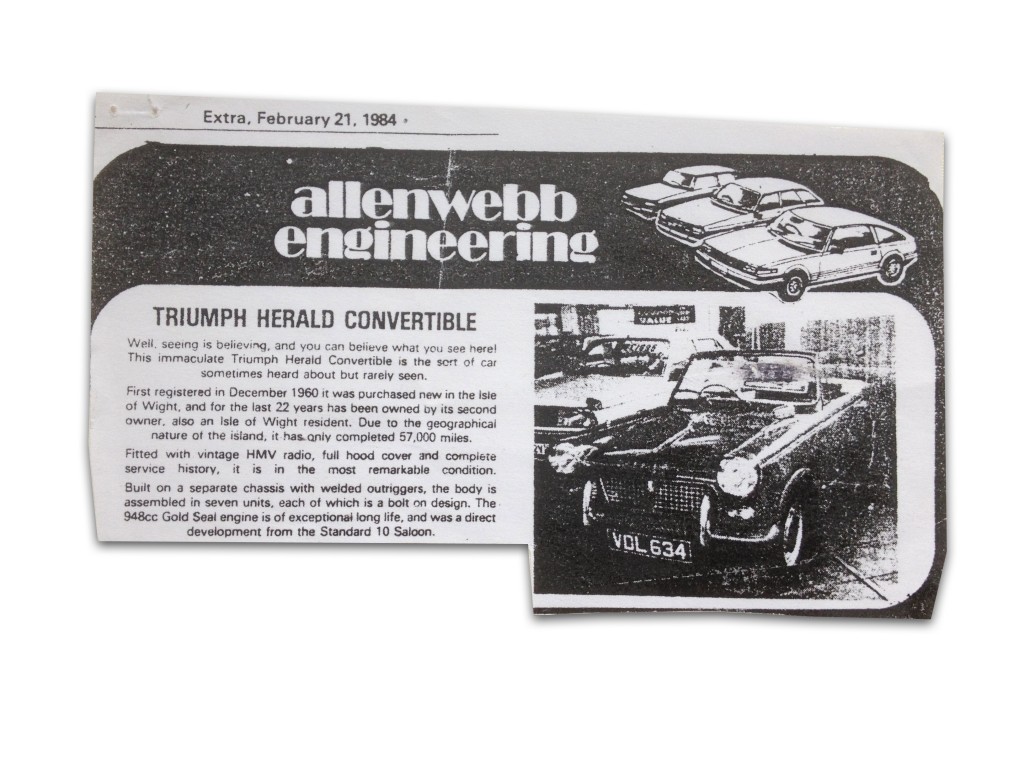 Intriguing too this note left in the first Service book dated c August 1961 with VDL’s mileage being at 11,698. The pencilled writing reads…
“11,698 Checked Greased etc before sale by Aedy’s Red Road Garage”
After this the first, of many, Service schedules are carried out by Totland Service Station on the other side of the Island in Freshwater ie, nearest to Colwell Road and Mr Stimsons house.

Initially I couldn’t make out all the pencilled writing however, further research found an address for ‘Red Road’ for H.J. Aedy’s Garage which was a Fiat, Morris and MG dealer on the Island located on Red Road before moving premises to High Street, Wootton and being there from 1964 to 1985. H.J. Aedy himself lived at the delightfully posh sounding Lushington House, Lushington Hill, Wootton. Was the car prepared for sale to Mr Stimson around August 1961?

The first entry in the Service Book is for Ryde Garage, Victoria Street, Ryde, Isle of Wight, dated 9th January 1961. This garage was known as Downing and Donovan. The mileage covered was noted as 1,330. Subsequent maintenance are marked in the book by pencil for 7th March 1961 (3,500 miles), 21st May 1961 (6,050 miles) and 2nd July 1961 (9,040 miles) – with Castollite added at 9,550 miles – but no dealer stamp to indicate where the car was. The book itself has no ‘owner’ marked on the front page – only the Registration, Commission and Engine numbers – as if it was waiting for the rest to be filled in.

The book is subsequently filled to the end up to 48,538 miles, all at Totland Service Station and a new book, a second Service book is then introduced. Here the first page has all the same number details with the addition of R. Stimson added as the owner with a date of purchase as 1960! 1960? But new evidence points to Mr Stimson purchasing the car around August 1961, when the car was one year old – was VDL used by Downing and Donovan longer than we were lead to believe? Initially a showcar in the showroom from August to December 1960, registered December 8th 1960 and used as a demonstrator from the start of 1961 through until August 1961 when VDL was 1 year old?  Clearly more hunting is required.