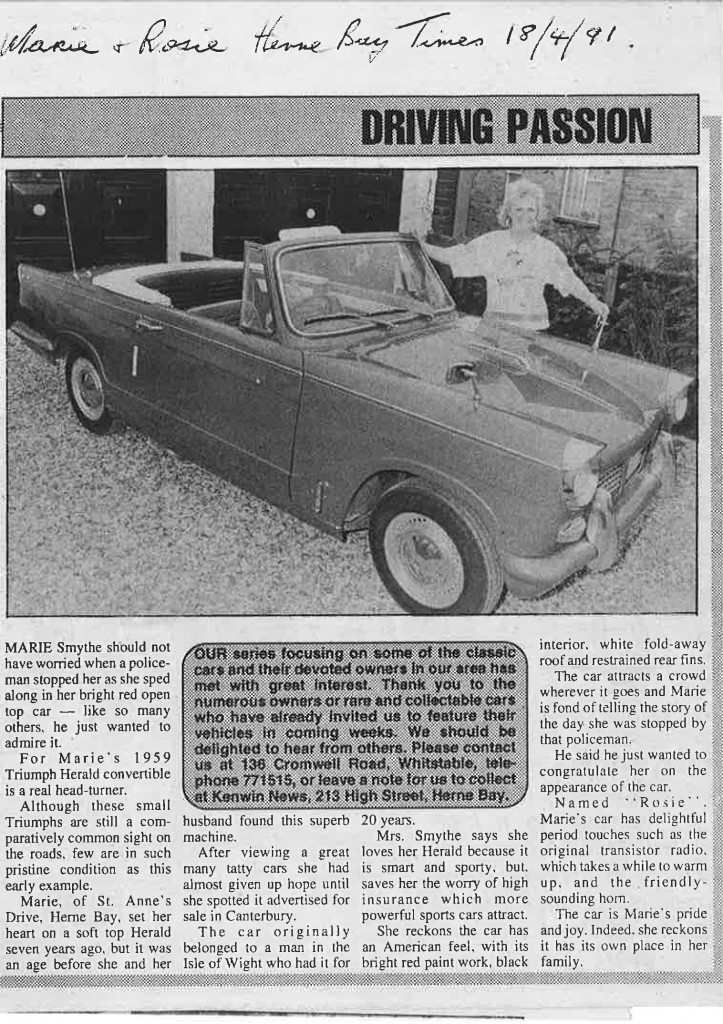 MARIE Smythe should not have worried when a police-man stopped her as she sped along in her bright red open top car — like so many others, he just wanted to admire it. For Marie’s 1959 Triumph Herald convertible is a real head-turner. Although these small Triumphs are still a com-paratively common sight on the roads. few are in such pristine condition as this early example. Marie, of St. Anne’s Drive, Herne Bay, set her heart on a soft top Herald seven years ago, but it was an age before she and her husband found this superb machine. After viewing a great many tatty cars she had almost given up hope until she spotted it advertised for sale in Canterbury.
The car originally belonged to a man in the Isle of Wight who had it for 20 years. Mrs. Smythe says she loves her Herald because it is smart and sporty, but saves her the worry of high insurance which more powerful sports cars attract. She reckons the car has an American feel, with its bright red paint work, black interior, white fold-away roof and restrained rear fins.  The car attracts a crowd wherever it goes and Marie is fond of telling the story of the day she was stopped by that policeman. He said he just wanted to congratulate her on the appearance of the car. Named “Rosie”. Marie’s car has delightful period touches such as the original transistor radio, which takes a while to warm to up and the friendly-sounding horn. The car is Marie’s pride and joy. Indeed, she reckons it has its own place in her family.