The Triumph Herald was a car that nearly didn’t get built at all. Manufacturer Standard-Triumph was stuck for a car body supplier to provide the shell for the new car’s unitary construction.

And but for chief engineer Harry Webster’s decision to attach individual panels to the chassis, the ultimately popular Herald may never have seen the light of day. 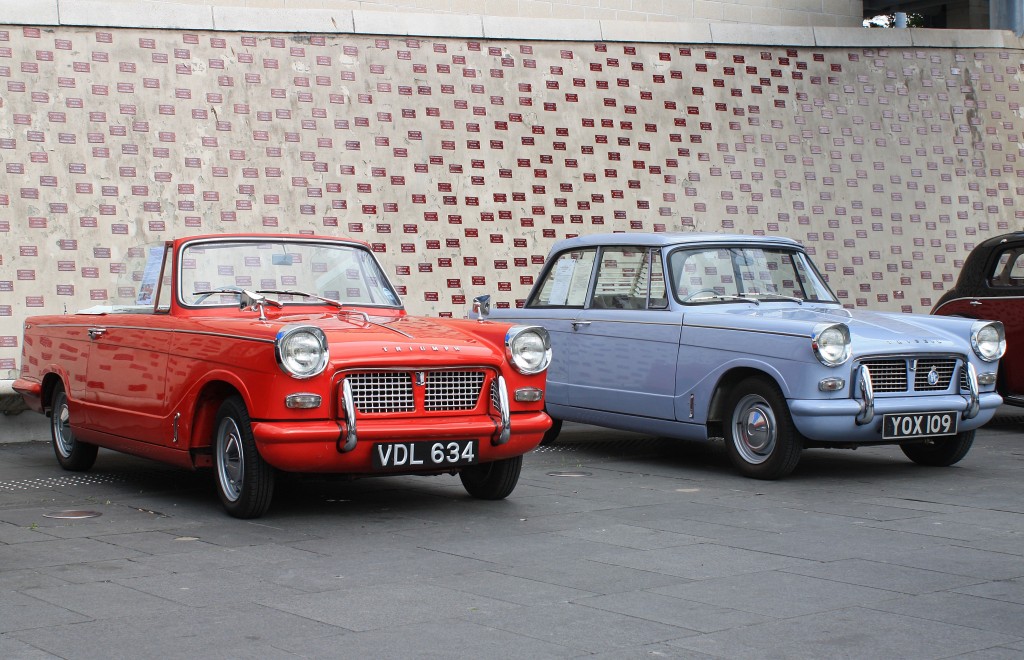 We take a look at the car that spawned the Spitfire and the GT6.

The year 1959 was a memorable one for the British motor industry. As well as seeing the birth of the Herald, it spawned the Mini and the Ford Anglia.

While the Mini went on to attain legendary status, the Herald’s 12-year production run, including developments including the sporty and eye-catching Vitesse, ensured the Michelotti-bodied car its own place in history.

The Herald marked a radical design change from the company’s Standard 8 and 10 models, which were fairly mundane – even standard – 1950s motoring fare.

Unhappy with the in-house designs put forward, Standard-Triumph opted to work with Italian stylist Michelloti, who came up with a car bristling with angles and sharp edges not dissimilar to the principal ideas behind the competing Anglia.

The Triumph marque, which was gaining traction as a brand at the time, was used on the new car to make a break from the previous models.

The real problem, however, was getting the car built in an era with limited manufacturing capacity for steel bodies.

With Standard-Triumph’s usual suppliers Fisher & Ludlow being taken over by rivals BMC, no body manufacturing facility themselves and no capacity in a crowded market, the only solution was to bolt panels made by a selection of smaller companies on to a separate chassis.

This was against the trend for monocoque construction, but has one distinct advantage today – anyone looking to restore a Herald can simply unbolt the panels in their garage, assess the rot (there will almost certainly be some!) and get to work. It also made different body styles easy to introduce as new panels could simply be bolted on to the same chassis.

This did, however, give the car something of a scruffy look – even tidy examples somehow look like they’ve been bolted together, with some uneven panel fit almost inevitable…

Initially, the Herald – named after company boss Alick Dick’s yacht – was powered by the four cyclinder 948cc unit used in the Standard Pennant.

These early cars used much of the running gear from the Standard 8 and 10, though its independent suspension was a first for a volume production car and its rack and pinion steering gave it an incredible 22ft turning circle.

MotorSport magazine called it “Britain’s first truly-advanced small car to be introduced since the war”, and praised its “many safety features and outstanding road-holding, steering and cornering”, declaring it “way out ahead of all other small cars at present being made in this country”.
They predicted that “the Triumph Herald is one of the world’s outstandingly interesting motor cars and may well embarrass its sponsors by the enormous flood of orders they can expect to receive for it”.

Performance was sluggish, however, with a top speed of just over 70mph and 0-60mph took more than 30 seconds. This, allied to poor build quality and a relatively high price (about £700), actually saw sales get off to a slow start.

A four-seater convertible was introduced in 1960, with a twin-carb version of the 948cc engine providing some useful extra power – but still not enough to put your hair too much at risk from the wind!.

The company was in trouble, and was itself swallowed up by the giant – and ultimately doomed – Leyland Motors in 1961. However, this was probably the best thing to happen to the Herald, as money and resources were finally available to turn the car into the sales success it became.