Fifty years ago I left school and started a six-year Toolmaking Apprenticeship, I had been brought up during the 1950s with my father being a motor car enthusiast, and then living in Kent, we would go to Brands Hatch at every race meeting.

When I started my job earning £3.15sh per week I decided that after giving my mother £1 per week for my keep, that I wo 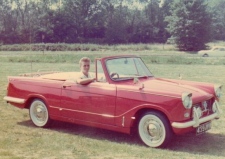 uld save the rest over the next two years to by a brand new car.

Over the next two years I saved every penny I could, and I placed the order in June 1963 for my new Triumph Herald Convertible in bright red and a white hood, it cost just £700.00. I took delivery in the first week of August, I waited up until midnight on the seventh to take my first driving lesson with my father.

If I remember correctly, we drove from Sidcup to Blackheath in London and I returned with a beam on my face which lasted for days.

The Triumph Herald was designed with the whole of the front bonnet and wings in one piece and could be lifted up which allowed you to clean and polish under the car as well as the top.

One day I remember it well, I was out for an afternoon drive through Knatts Valley near Brands Hatch when I came across a herd of cows being moved from one field to another, the state of the road was as you would imagine, conscious of the time I had spent polishing under the wheel arches, I turned the car around and went another way rather than splash the cows muck up around my highly polished wheel arches.

I had many wonderful holidays with my Triumph Herald, touring Devon, Cornwall and Wales all of which hold very fond memories. By the way, I passed my driving test on August 21, 1963 just over two weeks after my 17th birthday.